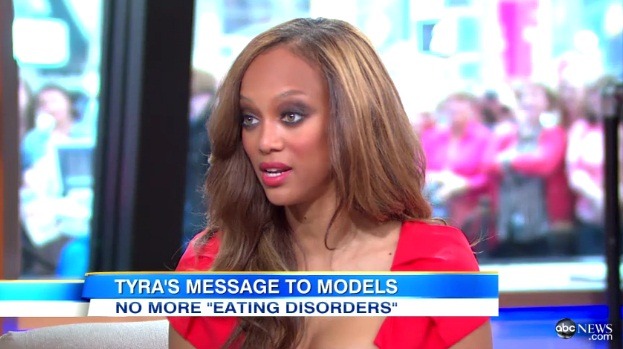 Tyra Banks is saluting Vogue’s 19 international editions for pledging to promote healthy body image, but she says real evolution will take some time.

“Real progress is finally on the horizon,” Banks writes in an open letter on The Daily Beast. “Vogue is stepping up, doing the right thing, and protecting that girl. Perhaps that girl is you!”
Earlier this month, Conde Nast, which owns Vogue, announced a six-point plan for what they’ll require beginning with their June editions. “Vogue editors around the world want the magazines to reflect their commitment to the health of the models who appear on the pages and the well-being of their readers,” international chairman Jonathan Newhouse said, according to the New York Times.

The bullet points are outlined as follows:
1. We will not knowingly work with models under the age of 16 or who appear to have an eating disorder. We will work with models who, in our view, are healthy and help to promote a healthy body image.
2. We will ask agents not to knowingly send us underage girls and casting directors to check IDs when casting shoots, shows and campaigns.
3. We will help to structure mentoring programs where more mature models are able to give advice and guidance to younger girls, and we will help to raise industry-wide awareness through education, as has been integral to the Council of Fashion Designers of America Health Initiative.
4. We will encourage producers to create healthy backstage working conditions, including healthy food options and a respect for privacy. We will encourage casting agents not to keep models unreasonably late.
5. We encourage designers to consider the consequences of unrealistically small sample sizes of their clothing, which limits the range of women who can be photographed in their clothes, and encourages the use of extremely thin models.
6. We will be ambassadors for the message of healthy body image.

Tyra suggests more supervision of underage models. She writes: “When I went to Paris after graduating high school, I saw a model who was 12 years old without any supervision. That wouldn’t happen in the acting world. There needs to be more industry-wide protections for models, and we need to be more consistent with what the acting world does: protect our minors, as well as the health and well-being of models.”
She discussed her open letter to the Daily Beast this morning during an appearance on “Good Morning America.” Watch below.