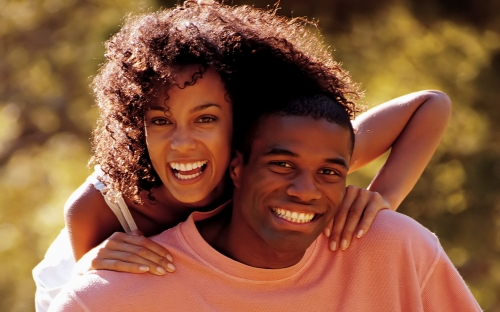 What would you change if you could go back in time?

Because through the process of finding love I’ve learned a lot. My eyes have been opened to a lot of the beliefs that hindered me through my dating years and through that process, I have been able to encourage others.  The following myths have done a lot of harm in the lives of many young adults: mine included.

1.  If you’re too picky you’ll never get married:  A while back (and I’m talking…a long while back), I had a dozen roses shipped to my house by a guy who had taken an interest in me.  Not sure if it was my frizzy hair or bad make-up that attracted him (you ever look back at those pictures and wonder how you ever walked out of the house looking like that?)  Anyway, it was a sweet gesture from a decent young man, but to be frank, I wasn’t interested.  Thankfully, I was at a healthy place in life and it didn’t take long for me to know that he wasn’t the right fit for me. So, rather than prolong the whole thing, I told him where I was at.

I’ll never forget that day, because at the end of the conversation he made sure to tell me that I would be an “old maid” some day with how picky I was about dating.  Now granted, he may have spoken out of his disappointment, but the truth is, he isn’t the first person who said that to me during my dating years.  I can count numerous men and women who have uttered those words in my presence, whether geared toward me or someone I know.  People I love and trusted, who really believed that you could miss out on marriage by being too choosy.  Seriously?  Since when is taking the time to make the biggest decision you will ever make in your life considered picky?

Looking back, they were ALL wrong- and I’m thankful I stuck to what I believed in my heart.  I am so glad I didn’t settle and waited for God to send me the man- who is not perfect, but perfect for me.  He’s the right fit, and I knew it in my heart more and more each day as we dated.  It was natural, it was easy, it was for real.  Don’t let yourself believe this lie, and trust your heart (and spirit!).  Because marriage is a decision you live with for the rest of your life.

2.  You should always, ever, only date to marry:  I used to be a firm believer of this.  You know, the days of reading books about “courtship” and “kissing dating goodbye” and not interacting with someone until you absolutely know that they’re the one.  But, eventually, my misinterpretation of these concepts got me in a lot trouble.

There was a season in my life that I really looked down on the concept of “dating around” as they called it- and thought that if I was going to date someone, I better be pretty darn sure I was going to marry them in the end.  Because ultimately, that’s the goal, right? But here’s the thing- life isn’t always so cut and dry. Sometimes, things just don’t work out and have to come to and end. And sometimes, ending those things is the best decision a person could have ever made.

While I would have (and still do) agree that dating is a stepping stone to marriage, deep down, the fear of failing in a relationship was actually what was driving me in how I interacted with the opposite sex. I didn’t want to fail God, to fail others, or to fail in my Christian walk. And the fear of failure can be a very paralyzing thing.  For me, it paralyzed me into staying in a relationship that I knew wasn’t right for me for far too long.  Just because I was afraid to fail. Just because I was afraid of playing the “dating game”.

Looking back now, I see failure after failure in my relationship history.  But I still see God’s hand all over my past.  He comforted me, guided me, stretched me, and taught me more than I realized then.  So even when relationships don’t work out in the end, it’s not simply failure or wasted time.  Sometimes, it’s freedom into a future that’s far beyond your scope in the here and now.

Because nothing – absolutely nothing- is ever wasted in the hands of the Creator.