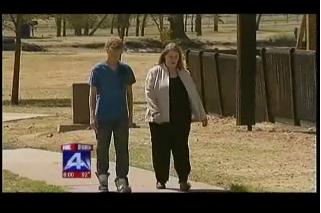 An honors student in Fort Worth, Texas, was sent to the principal’s office and punished for telling a classmate that he believes homosexuality is wrong.

Holly Pope said she was “absolutely stunned” when she received a telephone call from an assistant principal at Western Hills High School informing her that her son, Dakota Ary, had been sent to in-school suspension.

“Dakota is a very well-grounded 14-year-old,” she told Fox News Radio noting that her son is an honors student, plays on the football team and is active in his church youth group. “He’s been in church his whole life and he’s been taught to stand up for what he believes.”

And that’s what got him in trouble.

Dakota was in a German class at the high school when the conversation shifted to religion and homosexuality in Germany. At some point during the conversation, he turned to a friend and said that he was a Christian and “being a homosexual is wrong.

“It wasn’t directed to anyone except my friend who was sitting behind me,” Dakota told Fox. “I guess [the teacher] heard me. He started yelling. He told me he was going to write me an infraction and send me to the office.”

Dakota was sentenced to one day in-school suspension – and two days of full suspension.