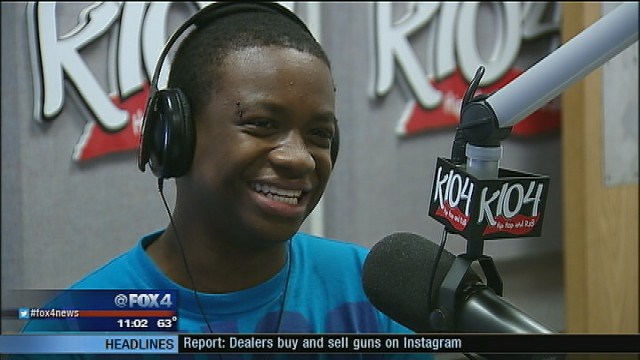 Kareem Gibbs (pictured), is an 18-year-old high school student who is considered to be charming, always upbeat and rarely seen without a smile on his face. The youth would make anyone think he didn’t have a care in the world, but behind Gibbs’ sunny disposition is a sad reality — he has a rare form of cancer and has been diagnosed to have only months to live. Yet, despite his gloomy forecast, Gibbs is upbeat and excited about being nominated for homecoming king at the Texas high school he attends in Keller-Central, reports My Fox 4.

A coach at Keller-Central contacted a local radio station, K-104, and explained how Gibbs had a rare form of cancer. The teen was invited to the station’s popular morning show, and in usual form, charmed not only the hosts of the program but the listeners as well. ”I try to stay as positive as I possibly can and try not to think of it too much and that’s really what gets me through the day,” he revealed on the air.

Gibbs was diagnosed with Undifferentiated Sarcoma at age 11. The first sign of the cancer began on his hip, appearing as a football-sized lump. The cancer has since spread to his lungs and now his heart.
Since his diagnosis, Gibbs has undergone a myriad of treatments and is now involved in a clinical trial, in which he has to travel to Atlanta once a week.

Now to say that Gibbs’ road has been a rocky one is an understatement, yet despite it all, he is a trooper with an infectious positive demeanor. “Kareem is the sunshine in our family. It’s not a party until Kareem shows up and sometimes its a party just because he showed up,” Rakiya Muhammed, Kareem’s mother, told My Fox 4.

The morning crew at the radio station were so taken by Gibbs that they gave him tickets to a Drake concert, passes to Six Flags and a Wal-Mart gift card.

Now it’s onward and upward for Gibbs, who can’t wait for the festivities that will take place at his school’s homecoming dance Friday night and is there no doubt he will reign supreme!