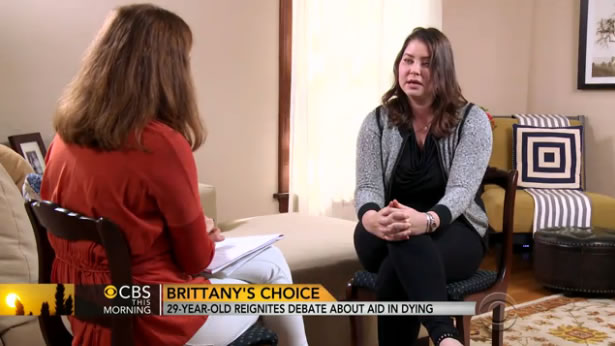 Brittany Maynard, 29, a terminally ill woman who’s made headlines for her decision to end her life, may not do so on the scheduled date of Nov. 1, she said in a new video posted Wednesday.

After her wedding last year, Maynard began having severe headaches, and in January was diagnosed with grade II astrocytoma. Doctors initially gave her 10 years to live, but subsequent scans showed the tumor progressed into glioblastoma multiforme, the deadliest form of cancer. In April she was given just 6 months to live.

The family moved to Oregon where the state’s “Death with Dignity Act” allows people to choose to die using medication. Since the act was instated in 1997, more than 750 people have taken advantage of it.

Brittany plans to die in her bedroom at home by taking medication which has already been given to her by her doctor. She will be surrounded by her husband, mother, step-father and best friend.

Brittany’s story should remind us to be grateful for the priceless things in life; Health, Family & Friends. No one is promised tomorrow. I say this because I woke up in a funk this morning. Over something that probably wont’t even matter a year from now, maybe not even tomorrow. But God always knows how to show us exactly what really matters. No matter what you’re going through right now, I urge you to just stop where you are and say a prayer for Brittany and when you’re done praying for Brittany, I want you to tell Him at least one thing that you are grateful for and Thank Him!