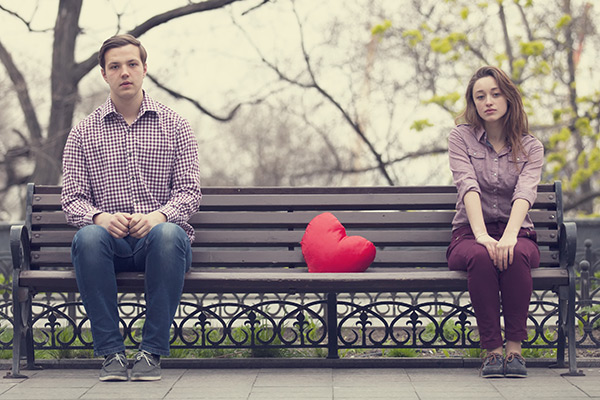 He was tall, handsome, and British. He had charm, intelligence, and a way of drawing me to him. Each new detail about him matched my image of the perfect man, especially because he was a Christian.

I was mesmerized that he would want to be with a small town girl from Georgia, and it wasn’t long before we were inseparable.

Two weeks into knowing each other, the passion was too overwhelming. We couldn’t keep our hands off each other, and sleeping together fully clothed seemed both ridiculous and impossible.

That’s when he said it. He looked straight at me and said, “Technically, in God’s eyes, we are married. We just aren’t married in man’s eyes.” I just looked at him blankly, forgetting everything I knew as Truth. As if under a spell, I replied, “How do you figure?”

He said, “We are monogamous, aren’t we? Everyone knows we are together. Technically, we are each other’s.” I was hooked. We began having amazing sex which led to our marriage only four weeks later.

What’s so bad about that, one might ask? He ended up being a con man. He lied about being in the British military, about having a college degree (he never attended college), about having two black belts, about his salary, about the girl he was still living with in England, and so much more. He was broke and a terrible liar…a con man seeking a green card. I had been duped.

I didn’t find all of this out at once. Little things didn’t add up. I noticed lies here and there, had people tell me he was lying to them, and basically, sadly knew something wasn’t right. It was a year and a half into the marriage that I suddenly found myself in a horrible, nightmarish mess I had not planned. His daughter “outed” him to me. He was not the man I married.

What will some guys do for sex? Pretty much anything. This is one very intelligent thing to know as a Christian woman.

Ladies, some men will slyly use the bible to get what they want. If they are charming enough, full of lust, and really convincing, you could find yourself delusionally going against God’s precepts.

Why would God not want me to have sex before marriage? The answer is very clear to me now.

I need time to get to know a potential mate. I need time to see if he is Godly, wants to love me like Christ loves the church, wants to encourage and uplift me…, or if he wants to trick me into sex.

I recently read this: “God would not send a woman a married man.” Well, God wouldn’t send me a man who would use the bible to trick me into having sex with him (which led to many other tricks). The enemy got me pretty good this time…but not for long.

In the end, I learned a very big lesson, one that has torn me apart at the seams. The lesson? Follow God’s precepts! They are created to help us navigate the rough and tricky waters of life, to keep us on straight paths, and to remind us who is and who isn’t His own.

There were many other lessons, of course, such as recognizing the enemy’s tactics and knowing God will never leave or forsake me. Yet, I keep going back to the same thing. If I say I’m going to follow my Creator, then I have to back that up with my actions.

Sex before marriage is a no-no for my own good. It can cloud one’s judgment with lust, in turn, presenting a much worse fate.

Keep to the path, tattoo the Word on the heart, and pray for strength, courage, and conviction. Where we are weak, God is strong. Ask for help, and stay awake. The deceiver prowls around seeking to devour.

I hope this helps someone reading this right now.

You may be reading this and not even realize how this message will help you later on in life. But God knows.

Cheryl Hancock, Ph.D.
Visit her at TheSpiritedPen.com
Cheryl Hancock, Ph.D., is a blogger, English professor, and critical thinker often challenging the ideas of those around her. As a Christ-centered woman, she seeks ways to help others better know Christ’s love.