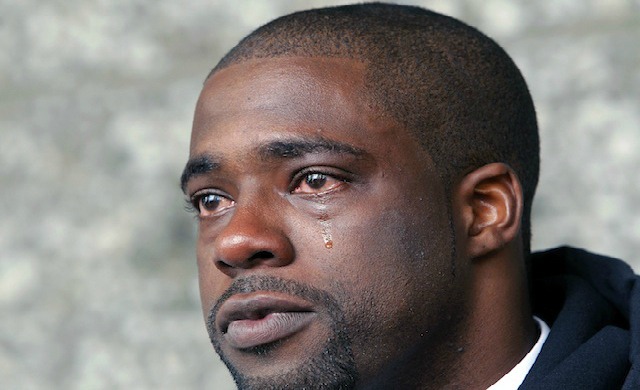 Most of us watched as Brian Banks, a rising football star who was falsely convicted of rape/kidnap, was exonerated yesterday after his accuser, Wanetta Gibson contacted him on Facebook and later recanted her story.

When Gibson accused Banks of rape following an encounter at Long Beach Polytechnic High School, his attorneys encouraged him to plead no contest instead of going to trial before a jury and risking 41 years in prison.

His attorneys said he “chose the lesser of two evils” when he pleaded no contest. Banks was sentenced to six years, which he served and is now on parole and registered as a sex offender.

On Feb. 28, 2011, Banks’ story took a dramatic turn. Gibson, his accuser, requested his friendship on Facebook. He did not accept it, but asked her if she would meet with him and a private investigator. She agreed.

“Gibson met with Banks and a private investigator and recanted her preliminary hearing testimony that Banks raped her,” his attorneys wrote. She said that the two had been “making out pretty heavy,” but that they did not have intercourse or “anything like that.”

“Gibson said that they were just playing around, being curious about sexuality, and that the adults got involved and blew it all out of proportion,” according to legal documents. “She said the adults ‘put stuff in [her] head.'”

Now, Banks is more than happy to get back to his life with a clean slate and has not given up his NFL dreams.

When Banks first heard from Gibson last year, he recalled praying for God to deliver him from the situation.
“I stopped what I was doing and got down on my knees and prayed to God to help me play my cards right,” Banks said in a Los Angeles Times report.

When asked if he harbors any bitterness or anger about what happened, he said, “I’ve been asked that question a couple of times and my answer’s always been no. You know I can hold on to that, that bitterness and that anger. It won’t get me anywhere.”

According to the former football star, prayer helped him through the tragic ordeal of being convicted and imprisoned for a crime he did not commit.

Watch the video below: