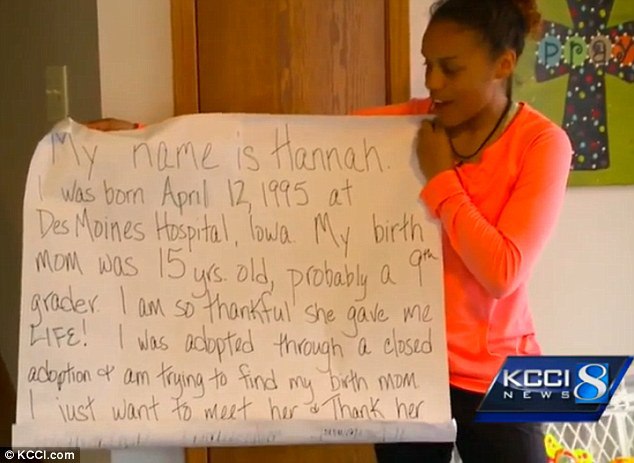 Hannah Stouffer was adopted at birth. She has wanted most of her life to meet the woman who gave birth to her. One day a lightbulb went off that she could utilize Twitter and Facebook to help in her quest, and according to KCCI, it worked!

In three days, the 19-year-old Des Moines, Iowa, resident claims she received an overwhelming responses from social media sites concerning the whereabouts of her birth Mom. Stouffer told KCCI, “I felt like I was going to throw up, like I wanted to scream,” said the pretty teen. “It was within three days, 50,000 people. Within an hour, I had over 5,000 retweets. I have over hundreds of shares on Facebook,” Stouffer said. “The next day, it was on KCCI.”

The Grand View University freshman, who also has a 1-year-old daughter, posted a picture of herself accompanied by the following plea:

“My name is Hannah. I was born April 12, 1995, at Des Moines Hospital, Iowa. My birth mom was 15 years old … I was adopted through a closed adoption and am trying to find my birth mom. I just want to meet her.”
Three days later, Nicole Reneir (pictured top left) responded to Stouffer’s plea, telling her that she was indeed her mother. “I didn’t believe it at first, and then she was asking different questions, and then she…asked her who delivered me, and she told me the name of the doctor,” Stouffer told KCCI. The teen then went on to ask the woman something that no one else would be privy to, “I asked her if she left me anything, and she said, ‘Yes, a blanket and an outfit.’”

Bingo! Stouffer then knew Reneir was in fact her birth Mom.

According to the Des Moines Register, Stouffer, who was beyond the moon with excitement and anticipation, says she and Reneir, who also lives in Des Moines, met over the weekend at a coffee shop. The meeting was fueled by overwhelming emotions and unmeasured surprise at how similar they both are in looks, mannerisms, and speech patterns. “We both love to sing, and she told me how picky of an eater she is,” said Stouffer. “She doesn’t like her food to touch. My food can’t touch either. I was like, Wow, that’s really crazy.”

Reneir gave birth to Stouffer at the tender age of 15 then went on to have another daughter a few years later. Stouffer met her sister and a step-sister at the touching reunion.

Stouffer, who finally no longer has to wonder where her features come from, is ecstatic about her newfound family, telling the Des Moines Register, “I don’t feel that empty feeling anymore.”

Reneir, who also met Stouffer’s adoptive parents, realized that she had made the right decision when she gave her child up with the hopes that her daughter could have a better life.

Now Renier and Stouffer are indeed a family, and the birth Mom has changed her Facebook photo to reflect her newfound joy with a caption that reads:
—
“Today has been an amazing day! I was reunited with a piece of my heart that I never thought I’d find again! I feel like a brand new person! My heart is on the mend and I’m overflowing with joy!!!” she added. ‘Thank GOD for her wonderful parents! Hannah is magnificent!”

Stouffer is in for another big moment this week: She’s planning on meeting her birth father as well.