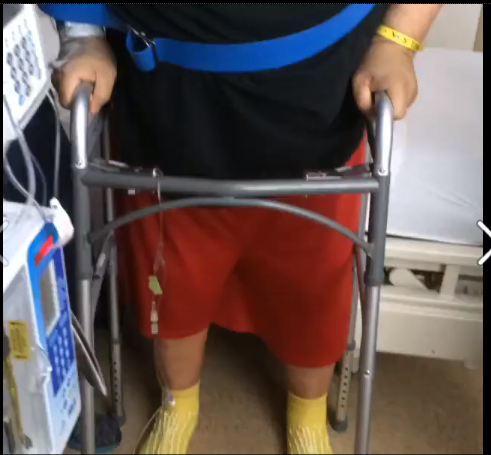 Gospel recording artist Fred Hammond is starting the year out with a bang! Many of us have watched Fred’s honest struggle with his knees. He even revealed a big disappointment last year. Well, he has let us in on a miracle in his life one year later!

Just a couple of days ago, Hammond underwent knee surgery. Only twenty minutes after the surgery, Hammond posted on Twitter, “Physical therapy 20 minutes after surgery, let’s go,” and posted the above picture. He also said, “Literally learning how to walk again. Stretching and exercising left til 6:30 then right leg @ 8:30… Pain, BUT I WILL BLESS THE LORD.”

Check out his note below:

Hey family. ( from my hospital bed.)
23 years ago I put out my first solo CD called I am persuaded. Back then I couldn’t afford a booking agent so I put my home number on the back of the CD.. I know back then it look like we/Commissioned were BALL’n like crazy but we weren’t, we had modest little lives and it was cool because we knew it/BALL’n was on the way because we worked hard and believed the Promise of God that we’d be blessed.
I was married at the time and my wife and daughter BreeAnn (2years old) all slept in the same room due to the house being so small. And because of time zone differences sometimes the phone would ring after hours and I have to catch it to make the proper arrangements for a gig, but it usually wouldn’t ring too much after 11pm or 12am, and if it did i’d usually let the answering machine retrieve the call. But this one particular day the phone rang at 2AM so not knowing if it’s an emergency or not I answered the phone. To my surprise there was two young fellas on the phone who immediately begin to apologize. They said we didn’t think you would pick up the phone but I was telling my partner that your voice is on the answering machine and we just wanted to hear your voice on answering machine. Being a little baffled and still sleepy somehow I decided to chit chat for minute. I didn’t know these guys from Adam’s house cat but I begin to ask them a few questions like where they from? and they told me, I asked them how old were they, and they told me they were both 17 getting ready to graduate high school. I asked him how do they like the commission records and he said they were big fans then i asked about my solo record, was it out where they where and say yes we both have any and everything you put out Mr Hammond, and I thought that was pretty cool. We chatted for a few more minutes and I reminded them to keep the Lord first and continue to get good grades because you and do well in college and they replied with respect yes sir thank you for talking to us minister Hammond, and that was the last time I talked to them.
Back in February 2013 we held a video shoot for the United tenors. And a gentleman from Washington DC now in his 40′s walked up to me and said this is like a dream come true man, I’m actually here in Dallas watching you perform, this is great. He said he noticed that I was limping and what was the problem? And I simply said I have really bad knees and I gotta get them fixed. The brother was so excited he begin to explain to me an event that took place in his life with a friend of his when they were kids. He got his friend on the phone and put him on speaker, they begin to explain to me how glad they were and how my music was a blessing to them throughout the years (college years) but mostly how when they were 17 they called my house at 2 AM in the morning and I didn’t cuss them out or be rude to them in anyway but I took time to talk to them and encourage them they were glad about that. Here’s where it gets interesting The one brother from DC is a consultant to sports companies and pro athletes. And the other brother here in Texas and said its because you took the time to talk to us and not be rude to us and your music has been such a blessing helping us through college years and becoming men and musicians I want to hook you up.
He happens to be one of the leading orthopedic specialist in Texas and last Friday gave me and my family first-class treatment and opened up/operated on both my knees and put brand-new ones in them. And you know hospital stays and operations of any kind can be expensive and the brother has blessed me financially in that way as well.
LOOK AT GOD!!!!!

Sometimes we don’t have to act all super Duper important, extra grand and suchy much, spiritually deep, quoting scriptures every five minutes to impress folk, or spitting prophecy all over people when they talk to you.

Sometimes all you have to be as nice and God will hook you up.
Blessings family
Thank you for your well wishes and support.
Love
f.

Look at God is RIGHT!!! Be careful how you treat people. You never know who He’ll use to bless you.